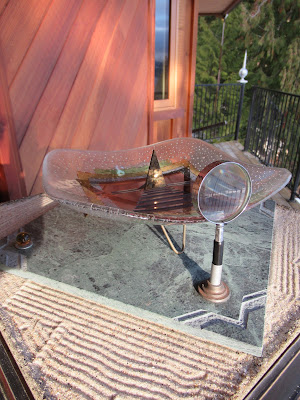 Sitting inside, I noticed the low angled sunlight peeking through the clouds in the late afternoon and skimming across the deck through the the glass door. Remembering the "Fourth Dimensional Time Piece #1" in its glass box just outside the door, I stepped out on the deck and saw that by turning the whole plinth with the "time piece", I was just in time to orient the lens to focus the rays of the sun onto the pyramidal form - once again in the serendipitous fashion I have experienced many times in past years. 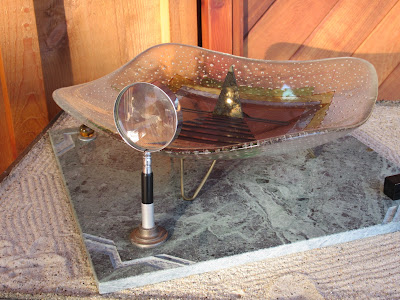 Originally, the components of this piece were playing with the idea of 'scaling', in which the actual shapes you are seeing can be interpreted (understood/misunderstood) to be an image of something either very large or very small. Without a 'context' to place them in, the mind,
being a pattern seeking  organ, will try to interpret the images or textures as something comprehensible.

Plato identified five geometric solids in his view of the universe: the cube, the tetrahedron, the octahedron, the dodecahedron and the icosahedron. I referenced these shapes in the corners of the stone base with the tetrahedron and cube, with the sphere representing the other three (roughly 'spherical') shapes. 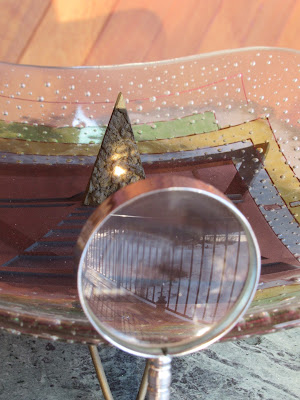 By moving the hand held lens over various parts of the piece, micro or macroscopic vistas can be imagined. The "interstellar space" of the trapped air bubbles in the layers of fused glass, or the "landscapey" texture of the polished stone. Viewing the chaotic surface of the cast brass pyramidal form with its liquid or 'flame melted' effect reminds me of the visual texture of clouds. 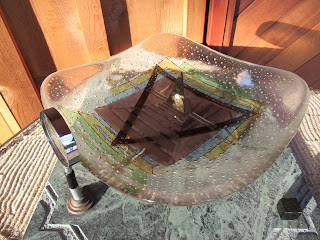 I had mounted the lens to the pyramidal form at the distance of the focal length of that lens, anticipating that a light could be arranged to create something like this effect. I am surprised how often the effect has been achieved in a variety of placements.

Although this was an effect I could imagine, the random kinetic effects of light through glass (focussed, refracted or transmitted) is a continual fascination for me. As familiar and yet ever changing as watching light on water, shapes in clouds or the flames of a fire. 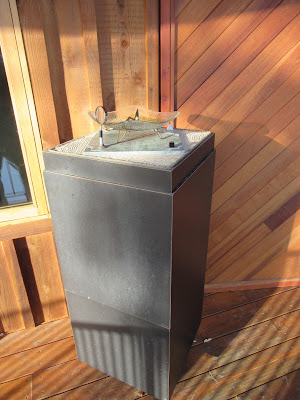 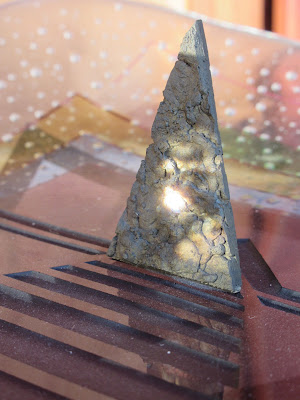